The Ulster Defence Regiment (UDR) existed between 1970 and 1992 as a locally recruited Army Regiment providing direct military support to the police in Northern Ireland during Op BANNER, colloquially known as The Troubles.  It was the largest infantry unit with eleven battalions at its peak.  Initially mostly a part-time force, its numbers grew and the proportion of full-time soldiers gradually exceeded that of part-time, although both worked side by side as complete sub-units.  Full-Time soldiers (known as Permanent Cadre) served on full career terms and conditions of service and contributed to a Service pension.  Part-Time soldiers served on gratuity-earning terms and conditions and, assuming they met the requirements for a Certificate of Efficiency each year, were paid an annual tax-free bounty instead.  Female soldiers (known as Greenfinches) served in both Full Time and Part-time capacities.

As part of broader Army re-structuring, the UDR amalgamated with The Royal Irish Rangers in 1992 to form the new Royal Irish Regiment (R IRISH) which then consisted of General Service (GS) Battalions (conventional infantry), Home Service (HS) Battalions (serving only in Northern Ireland as part of Op BANNER and specialising in Counter-Terrorist/Counter-Insurgency roles) and Territorial Battalions, Reservists still known as RANGERS to differentiate them from other categories.  The Home Service still consisted of both Full Time and Part Time regular soldiers, who were designated HSFT and HSPT accordingly.

Only Full-Time soldiers of all categories contributed to an occupational pension-earning scheme which was payable after certain milestones had been reached or otherwise preserved until age 60.  (Some Full Time (Con Rate) soldiers in the early UDR years until 1975 did not join such a pension scheme.)  All categories of soldiers are, however, eligible to apply for compensation for injuries (physical and mental) attributed to or aggravated by their service.  Prior to 2005, the scheme is known as War Disablement Pension (WDP).  After 2005 it is the Armed Forces Compensation Scheme (AFCS). 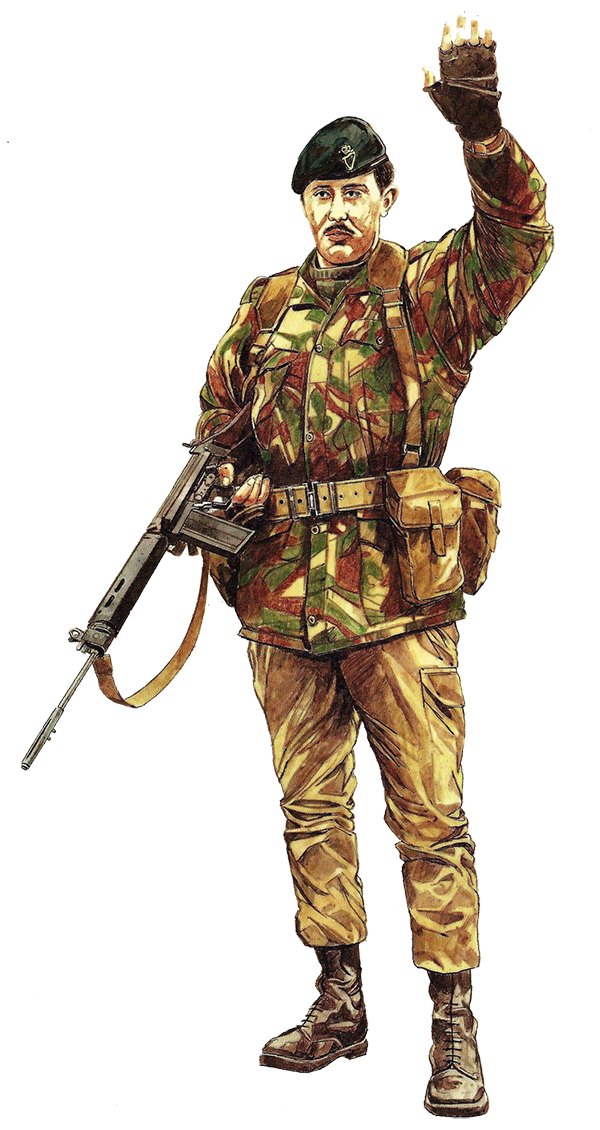 Click on an FAQ topic to reveal the relevant Q&A's

Eligibility
Answers to eligibility questions
Medical Support
Answers to Medical Questions
Financial Support
Financial Support questions
Pensions Advice
Answers to eligibility questions
Respite Support
Answers to questions about the respite and Families Group
General FAQs and Support
General questions and answers
NOTE:
• It should be noted that all applications for financial support from Benevolent Funds are subject to strict criteria set by their Trustees, underpinned by their Funds' legal requirements. Aftercare Service caseworkers will provide advice and guidance on all welfare issues and can assist in completing applications. (We routinely defer to expertise from Veterans Welfare Service of Veterans UK in the case of pensions, WDP and AFCS.) Acting as the conduit for Benevolence support, caseworkers will ask clients to provide personal details and financial records which are required by Trustees to make their informed decisions. These may take the form of bank statements, invoices and estimates for services. Applicants should be aware of this requirement when seeking financial assistance.

Have a question that is not answered? if so please contact us and we will endeavour to answer it.

Am I eligible for Aftercare Service assistance?

My Spouse/Father/Mother/ Brother/Sister served in the UDR and or R IRISH (HS). Am I eligible for Aftercare Service assistance?

In some cases where a close family member has been affected directly by a veteran’s military service they may be entitled to our assistance, however the best way to ascertain this is to

Am I entitled to ask for physiotherapy?

Physiotherapy assessment and treatment is part of the medical service the Aftercare Service can offer if you are eligible; the condition you seek treatment for must have been caused by or aggravated by your service. There are limits on the amount of physiotherapy available.

Is there any additional assistance for medical needs?

On 1st Sep 2021, Trustees of the UDR Benevolent Fund initiated a “Health Care Scheme” trial. The trial will run for one year, at the end of which the viability of having a full scheme will be assessed. The scheme does not cover the cost of medical treatment, it opens  up the potential for UDR Veterans to have access to private consultations in order to alleviate waiting lists in the statutory Health Service. Additionally, in some cases Trustees may consider paying for specialist engagement with other agencies to provide necessary equipment not otherwise available.  Each case is considered on its own merits, so please

I received physiotherapy / psychological therapy via Aftercare Medical Service; can I get a medical report?

You need to contact the medical service provider directly and ask for this information.  Depending on exactly what you require there may be a charge for this service. If you need help to do this.

Can I get assistance or funding for other medical issues?

Physiotherapy and Psychotherapy can be offered by Aftercare Service for service-related issues only.  Treatment for all other medical issues should be sought through your GP and the Health Service.

Am I entitled to ask for psychological therapy?

Psychological therapy assessment and treatment is part of the medical service the Aftercare Service can offer if you are eligible; the condition you seek treatment for must have been caused by or aggravated by your service.

Can I get a copy of my Army Service and/or Medical records?

Using a Subject Access Request (SAR) form, any veteran can request full disclosure of their Service records, which include medical documentation, from Army Personnel Centre, Glasgow. Please see link below for their website.

Does the Benevolent Fund cover the cost of funerals?

As a general rule, the benevolent funds do not cover or contribute to the cost of funerals.  However, in certain circumstances they may contribute to overall financial well-being at this critical time where need is proven.  See Note Below

Can I get financial assistance from the Benevolent Fund?

Depending on your service in either UDR and or R IRISH(HS) (or both) you may be eligible for Benevolent Fund assistance in cases of  age, ill health, disability, and financial hardship. Applications are considered after determination of individual circumstances by Trustees of the relevant funds.  Aftercare Service welfare caseworkers can assist with such applications and provide advice and guidance on their completion. See Note Below

Am I eligible for Family Group Membership?

Family Groups comprise widow(er)s, bereaved parents and siblings and disabled ex-soldiers who have been directly affected by terrorist action and, in some cases, their carers.  They are geographically sited across the Province.  Membership can attract some financial support from the Benevolent Funds so is at the discretion of Trustees.  If you wish to check eligibility to apply, please

Am I eligible to use the UDR respite apartments in Portrush?

Applications are prioritised by welfare need and allocated at an annual session in February each year.

Am I entitled to a pension for my UDR / R IRISH(HS) service?

Full Time soldiers will probably have contributed to a pension fund which may be payable at key milestones.  Part Time soldiers will have received a gratuity instead so have no occupational entitlement.  Individual circumstances will vary, to discuss this,

Am I entitled to a War Disablement Pension (WDP)?

Anyone affected physically or mentally by their military service prior to 2005 can apply for a WDP via Veterans UK which varies in amount depending on agreed percentage of disability.  After 2005 the scheme is called Armed Forces Compensation Scheme (AFCS) and results in a lump sum payment.  Applications will be considered on their merits and, if successful, compensation paid from the point of application. You can access further information as detailed below.

I am in receipt of a War Disablement Pension. Can I apply to have it increased?

If you feel your conditions have deteriorated or you have developed new conditions attributable to or aggravated by service an application for review of a WDP can be made to Veterans UK who will re-assess the situation.  Reviews can cause financial amounts to remain steady, to increase or to decrease – depending on their findings.

Can the Aftercare Service assist with employment issues?

In general we refer onwards to the Regular Forces Employment Association (RFEA) which is a registered military charity and has subject matter expertise in re-employment of former military personnel.  In some instances the relevant Benevolent Fund may also provide funding for re-training to improve employment chances.  Certain criteria apply, such as evidence of financial need, a written offer of employment subject to gaining a certain qualification and production of a quote for the course/training cost. The application to the Benevolent Fund is facilitated through the Aftercare Service by completion of a financial application.  See Note below

Does the Aftercare Service provide personal security help and or advice and guidance?

Any security issues or concerns you have should be directed to the PSNI.

Can I request a Piper for a funeral?

All requests for Pipers to play at funerals should be directed to RHQ R IRISH.  Pipers can be provided for all antecedent Regiments, subject to availability, follow the link to contact RHQ R IRISH

Does the Aftercare Service provide a befriending service?

The Aftercare Service does not offer a befriending service due to having a limited number of staff.  However, we can refer individuals to organisations which offer such a service, and these are dependent upon where you live.

Can the Aftercare Service assist with housing issues?

There are no direct links with the NI Housing Executive (NIHE) to short-cut their points-based entitlement system.  Aftercare Service can advise on useful contacts and support organisations to assist when dealing with NIHE.  For private rental issues, financial assistance may be available through the relevant Benevolent Fund to cover the deposit and first months’ rent, subject to evidence of need and the ability to pay for future rental instalments.   See Note below

How can I get a replacement medal?

You can only get a replacement medal (suitably engraved) from the Ministry of Defence Medals Office (MODMO) if the original was stolen or destroyed, for example in a fire or flood. The medal must have been awarded for service after World War 1 and proof of how it was lost must be provided; for example, a police crime report.  Un-engraved copies of most medals (full-size and miniature) can be purchased from a variety of outlets - many of which advertise in the Royal British Legion magazine .